Just before 9:00 am on May 30, the Burlington, Iowa, fire department got a call to rescue a farmer trapped inside a grain bin. 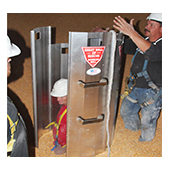 When firefighters arrived on the scene, only the man’s head and neck were visible in a grain bin that was about two-thirds full, media reports said. He was trapped for an hour before emergency crews arrived. He had been working to move the grain out of the bin when the top crust gave way, sending him down into the grain, according to local TV station KWQC.

Emergency crews used specialized rescue gear, an interlocking grain tube from KC Supply Co., to stabilize the man inside the bin. When using the tube, it is placed over the victim, easing the pressure on him until ropes and harnesses can be used to pull him out.

Grain was then removed from the bin to free the farmer, who walked out of one of the doors of the bin to a waiting ambulance. He was transported to the local hospital for evaluation, but his injuries were not life-threatening.

“It just turned into a small avalanche, there was an air pocket in there somewhere and it just trapped him,” Diane Lange, the man’s sister, told KWQC. “He’s amazing – took him several hours to get extricated out of there and he climbed out of the grain bin on his own will, it was amazing.”

Battalion Chief Bruce Workman of the Burlington Fire Department said the grain tube and their training saved the man’s life.

The man’s family was so grateful to the firefighters that his daughter purchased a new grain tube to donate to another fire department for use in future rescues.

It’s critical to have rescue gear on hand for grain entrapment and other emergencies. In addition to the grain tube, other key rescue devices include the patented red rescue auger and the silver wall, KC Supply’s exclusive bolted‐on internal and external steps. Scott Moseley, owner of KC Supply Co., said his company is proud to partner with a national insurance company to provide training to first responders with its equipment and talk about the great success stories like Ms. Lange’s father’s. For more information or to order rescue gear so you’ll be prepared for an emergency, call 800.KC.SUPPLY or visit www.kcsupply.com.