Why We Believe in the Grain Rescue Tube 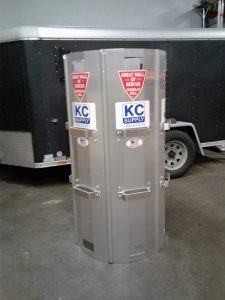 Believing in the use of a grain rescue tube addresses the issue of grain-storage related accidents.

Grain bin emergencies and incidents have risen through the past few years, and the tide is steadily turning towards the growing realization that there needs to be a grain rescue tube at hand in every fire department. Here’s why.

The Rise of Grain Bin Safety

As grain storage systems have advanced, the efforts and steps taken by both companies and authorities for grain rescue have also begun to ramp up. Nationwide’s National Grain Bin Safety Week is one such effort that aims to remind companies and suppliers all over the country that grain bin safety is essential for the welfare of all employees that work daily around one.

Joining in Nationwide’s effort to better promote grain bin safety, KC Supply has stepped up to become one of the best-known suppliers of grain rescue tubes. Designed with modular styles, steps, and locking panels, the tubes provided by KC Supply greatly cut down the time it takes to rescue workers who are trapped in grain storage bins or tower dryers. The efficiency of the tubes combined with their increased durability is a modern advancement in grain rescue.

“(The tubes) slide easily through most grains,” says President Scott Moseley. The company ensures that its tubes will ultimately cut down response time as well as the need for extra insertion tubes.

Speed and Safety are Top Priorities

According to Fire Chief Johnny Craft of the Hugo Fire Department in Kinston, North Carolina, the department’s interest in the KC Supply grain tubes began during an ongoing emergency with trapped personnel in a grain bin. It had taken hours to remove the victim from the situation, and in his search for more efficient and less hazardous methods, he came upon the grain rescue tubes by KC Supply. Using the tube, the extraction of trapped personnel went down to 45-90 minutes, as opposed to hours in the previous methods.

KC Supply has proven its commitment to grain bin safety and continues to deliver grain bin rescue tubes to fire departments to make grain rescue missions more efficient. Head over to KC Supply and discover other safety means and methods we endorse.