Protecting Yourself from Silo Gases

Spending any time inside a silo can be dangerous. The risks include an employee slipping and falling into the agricultural product inside, or inhaling silo gases and getting sick. Silo gases also can negatively impact your livestock. 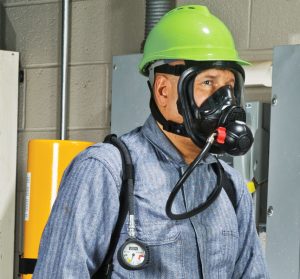 The most common silo gases are carbon dioxide (CO2) and nitrogen dioxide (NO2). Types and concentrations of silo gas vary depending on the type of silo and how much time has passed since the grass or other green fodder (silage) was placed in the silo, according to Pennsylvania State University’s Department of Agricultural Safety and Health.

The most plentiful type of gas in a conventional silo is nitrogen dioxide, which has a bleach-like odor and produces low-lying yellow, red or dark brown fumes. Nitrogen dioxide is heavier than air and so tends to settle on top of the silage or to flow down the chute and collect in adjoining feed rooms or other low-lying areas near the base of the silo.

Silo gases can cause serious respiratory issues, Pennsylvania State University found. Nitrogen dioxide causes severe irritation to the nose and throat, which can lead to lung inflammation. After low-level exposure to nitrogen dioxide, a person may not notice any discomfort initially but may later suffer from fluid collection in the lungs that may be fatal. Prolonged or recurring pneumonia-like symptoms can occur two to six weeks after initial exposure.

Pennsylvania State University suggests several things you can do to decrease the risk of exposure to silo gases, including:

Silo gases are a serious but invisible threat. It’s critical to protect your facility and employees. KC Supply Co. will help keep your workplace safe. Call KC Supply for gas monitoring products to protect your employees and facilities. Call 1.800.KC.SUPPLY or visit www.kcsupply.com to learn more.