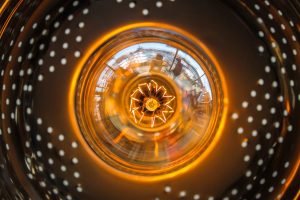 Hazardous locations – where there is the potential for a fire or explosion due to electrical equipment operating in an area where there might be flammable or ignitable gases, liquids, vapors, dusts or fibers – require equipment rated for the environment, including lighting.

The National Electrical Code (NEC) along with the National Fire Protection Association (NFPA) and Underwriters Laboratories (UL) have a published guide that classifies hazardous areas into classes, divisions and zones.

Class II locations consist of locations where combustible dusts may exist and have the potential to become flammable or ignitable. In Class II locations, the dust’s ignition temperature, electrical conductivity and thermal blanketing effect it can have on heat-producing equipment such as lighting fixtures and motors are the deciding factors in determining the Class II groups. Locations that would be considered among Class II locations include grain elevators and grain-handling facilities, and flour and feed mills.

Group G dusts include plastic dusts, most chemical dusts and food and grain dusts. They are not electrically conductive. These dusts, in general, have the highest thermal insulating characteristics and the lowest ignition temperatures. Thus, equipment for use in Group G atmospheres must have the lowest surface temperatures to prevent ignition of a layer by the heat generated by the equipment.

In 2017, there were three major dust explosions in the United States, which killed several employees. Most recently, in May, an explosion at a mill in Cambria, Wisc., killed five and injured 12.

Dust explosions are one of the most dangerous and challenging hazards facing a grain handling facility. That’s why Class II-G electrical components are required in grain elevators. These components include lighting.

This lighting is important for safety and for meeting OSHA’s hazardous location lighting safety standards (OSHA 29 CRF 1910.272). According to OSHA, compliant lighting should be “An apparatus enclosed in a case that is capable of withstanding an explosion of a specified gas or vapor that may occur within it and of preventing the ignition of a specified gas or vapor surrounding the enclosure by sparks, flashes, or explosion of the gas or vapor within, and that operates at such an external temperature that a surrounding flammable atmosphere will not be ignited thereby.”

Lighting rated for a grain handling facility must be designed to prevent inadvertent ignition, either by preventing ignited gases or materials from escaping the light during a fault or ignition within the light – which could ignite the surrounding volatile atmosphere – or by prohibiting the potential for the creation of sparks and heat. Also, switches, contacts, internal wiring and other potential sources of electrical energy are heavily shielded and sealed against the possibility of contact or damage that may cause sparks or overheating should the unit become damaged. So lamps and electrical contacts are encased within rugged sealed housings that can contain an internal explosion and/or channels are created through the use of finely threaded joints and pathways within housings that force escaping ignited gases to travel along lengthy passages before exiting the housing, in turn lowering the temperature of these gases to a safe level before exiting the unit and gaining exposure to the environment outside of the lamp.

Do you have questions about Class II-G-compliant lighting? Call the experts at KC Supply Co., 800.527.8775. KC Supply stocks an extensive inventory of Class II-G lighting as well as confined space entry, single-gas and multiple sensor gas monitors to maintain a safe working environment in your grain handling facility. Reduce the risks of fire, explosion, hazardous exposure and asphyxiation, and keep your employees safe with equipment rated for the environment. Visit us at www.kcsupply.com to learn more.